This article briefly talks about the hook interfaces CommandLineRunner and ApplicationRunner, which are sometimes referred to as Runner in the following.

Refer to the source code of the org.springframework.boot.SpringApplication#run() method. You can know the timing of the callbacks for CommandLineRunner and ApplicationRunner. 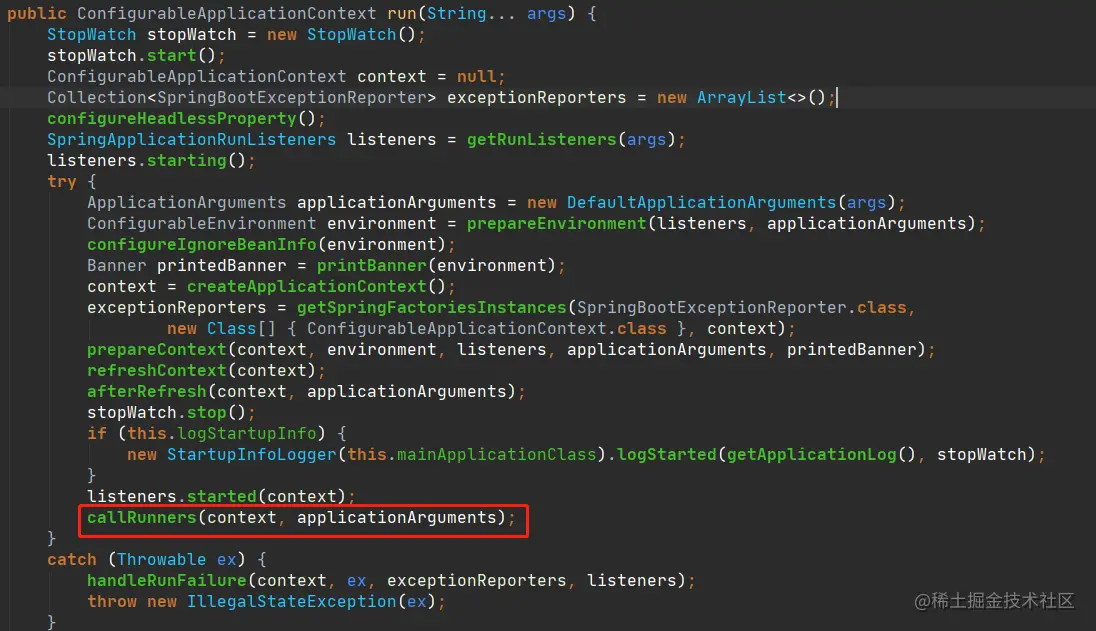 Before all CommandLineRunner and ApplicationRunner callbacks, the following steps have been ensured to be executed.

Simple use of ## Runner

The annotation @Component can be applied directly to the implementation class of CommandLineRunner or ApplicationRunner, as opposed to adding the corresponding implementation singleton to the Spring context.

It is also possible to act directly on the methods corresponding to the anonymous classes of CommandLineRunner through the @Bean annotation, e.g.

Or implement the CommandLineRunner interface directly in the startup class (“This approach is not recommended “).

Orderedinterface or the@Orderannotation to define the order ofRunner` callbacks, the smaller the specified order number, the higher the priority.

This subsection is a suggestion based on personal programming habits. When the Runner hook interface calls back “If an exception is thrown, it will directly cause the application process to exit “, so if the Runner callback method must pay attention to the exception catching and handling. Based on this feature, combined with the previous analysis of the callback timing of the Runner interface, the main scenarios it applies to are

The following uses CommandLineRunner to start all Jobs in Quartz (remember to import the dependencies spring-boot-starter-quartz and quartz first), and for simplicity the scheduler uses the in-memory state.

After starting the application, the logs are as follows.