Most traditional applications deal with blocking calls or, in other words, synchronous calls. This means that if we want to access a particular resource in a system with most of the threads being busy, then the application would block the new one or wait until the previous threads complete processing its requests.

If we want to process Big Data , however, we need to do this with immense speed and agility. That’s when the software developers realized that they would need some kind of multi-threaded environment that handles asynchronous and non-blocking calls to make the best use of processing resources.

This article is accompanied by a working code example on GitHub.

What is a Stream?

Before jumping on to the reactive part, we must understand what streams are. A Stream is a sequence of data that is transferred from one system to another. It traditionally operates in a blocking, sequential, and FIFO (first-in-first-out) pattern.

This blocking methodology of data streaming often prohibits a system to process real-time data while streaming. Thus, a bunch of prominent developers realized that they would need an approach to build a “reactive” systems architecture that would ease the processing of data while streaming . Hence, they signed a manifesto, popularly known as the Reactive Manifesto.

The authors of the manifesto stated that a reactive system must be an asynchronous software that deals with producers who have the single responsibility to send messages to consumers . They introduced the following features to keep in mind:

Reactive programming is a programming paradigm that helps to implement non-blocking, asynchronous, and event-driven or message-driven data processing. It models data and events as streams that it can observe and react to by processing or transforming the data. Let’s talk about the differences between blocking and non-blocking request processing.

In a conventional MVC application, whenever a request reaches the server, a servlet thread is being created and delegated to worker threads to perform various operations like I/O, database processing, etc. While the worker threads are busy completing their processes, the servlet threads enter a waiting state due to which the calls remain blocked. This is blocking or synchronous request processing. 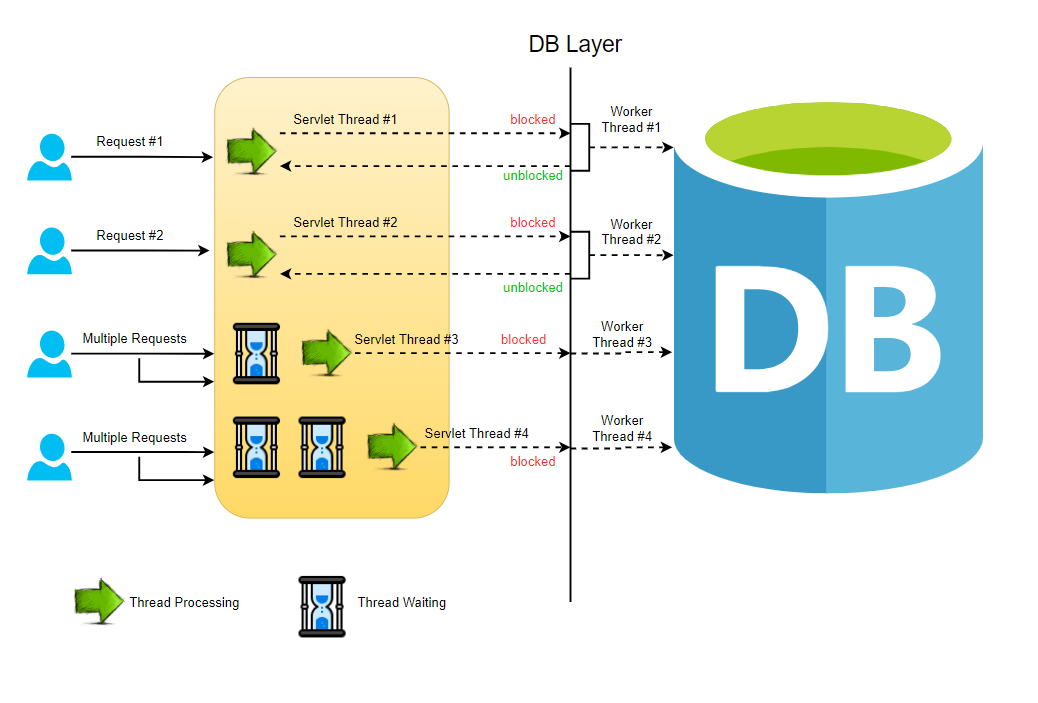 When the handler function completes its process, one of the threads from the pool fetches the response and passes it to the callback function. Thus the threads in a non-blocking system never go into the waiting state. This increases the productivity and the performance of the application.

A single request is potentially processed by multiple threads! 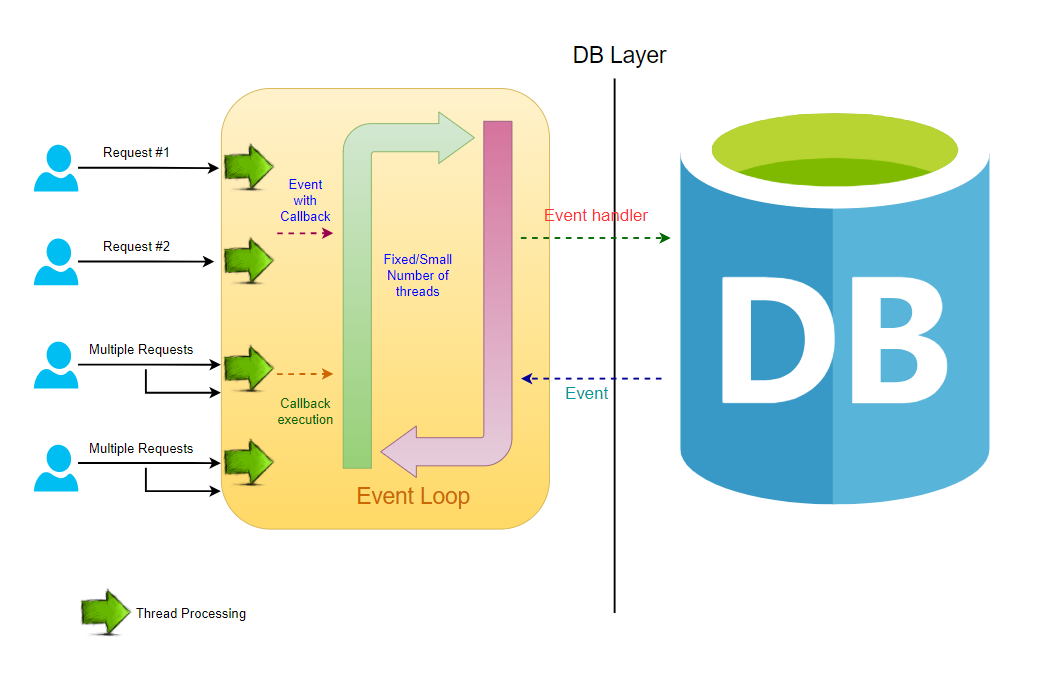 Working with reactive code, we often come across the term “backpressure”. It is an analogy derived from fluid dynamics which literally means the resistance or force that opposes the desired flow of data. In Reactive Streams, backpressure defines the mechanism to regulate the data transmission across streams.

Consider that server A sends 1000 EPS (events per second) to server B. But server B could only process 800 EPS and thus has a deficit of 200 EPS. Server B would now tend to fall behind as it has to process the deficit data and send it downstream or maybe store it in a database. Thus, server B deals with backpressure and soon will go out of memory and fail.

So, this backpressure can be handled or managed by the following options or strategies:

The reactive landscape in Java has evolved a lot in recent years. Before we move on further to understand the Spring Webflux component, let’s take a look into the reactive core libraries written in Java today. Here are the most popular ones:

Spring Webflux is internally built using the core components of RxJava and RxNetty.

The whole purpose of Reactive Streams was to introduce a standard for asynchronous stream processing of data with non-blocking backpressure. Hence, Java 9 introduced the Reactive Streams API . It is implemented based upon the Publisher-Subscriber Model or Producer-Consumer Model and primarily defines four interfaces:

Spring introduced a Multi-Event Loop model to enable a reactive stack known as WebFlux . It is a fully non-blocking and annotation-based web framework built on Project Reactor which allows building reactive web applications on the HTTP layer. It provides support for popular inbuilt severs like Netty , Undertow , and Servlet 3.1 containers.

Before we get started with Spring Webflux, we must accustom ourselves to two of the publishers which are being used heavily in the context of Webflux:

Once the stream of data is created, it needs to be subscribed to so it starts emitting elements. The data won’t flow or be processed until the subscribe() method is called. Also by using the .log() method above, we can trace and observe all the stream signals. The events are logged into the console.Reactor also provides operators to work with Mono and Flux objects. Some of them are:

Until now we have spoken a lot about Reactive Streams and Webflux. Let’s get started with the implementation part. We are going to build a REST API using Webflux and we will use MongoDB as our database to store data. We will build a user management service to store and retrieve users. 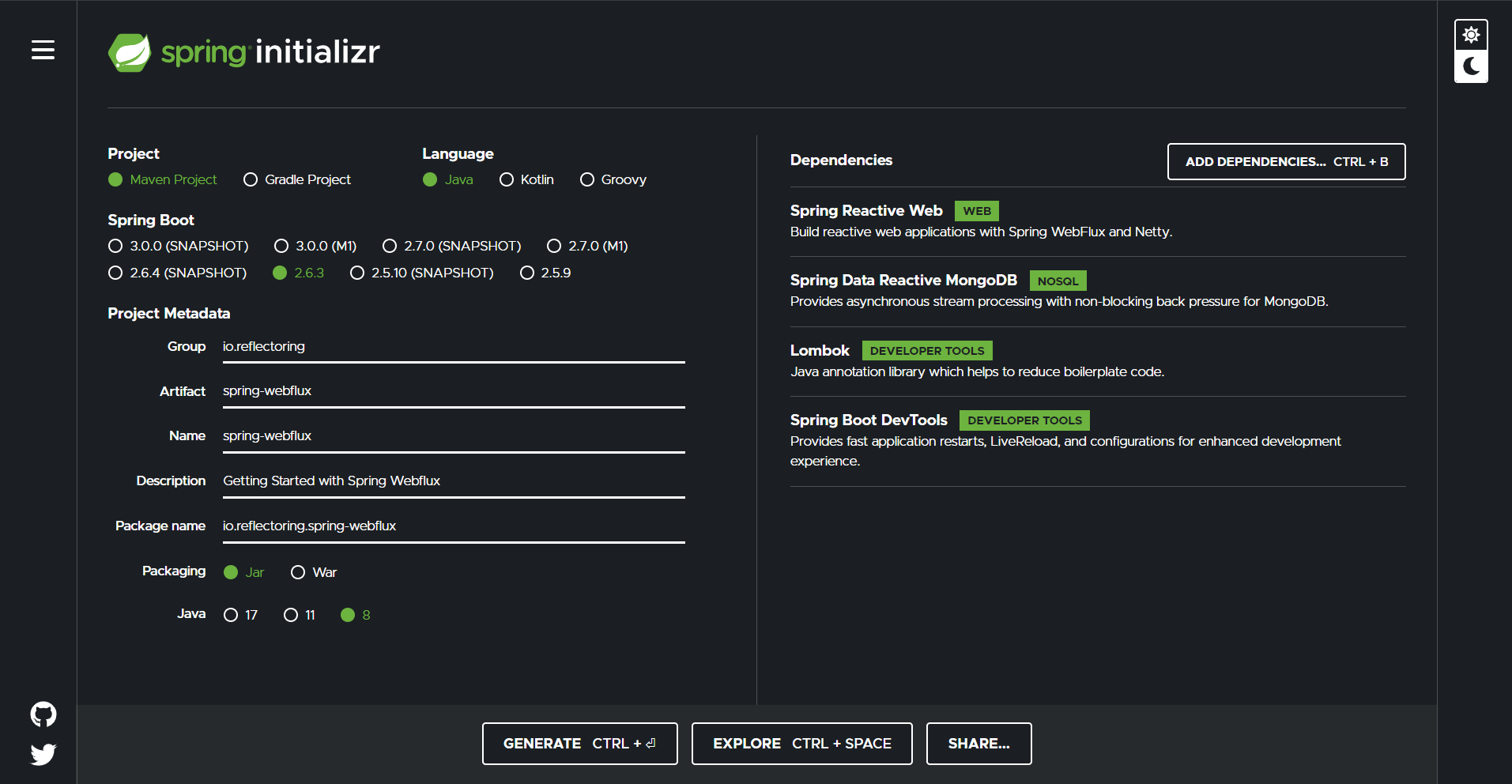 We have added the Spring Reactive Web dependency, Spring Data Reactive MongoDB to reactively connect to MongoDB, Lombok and Spring DevTools . The use of Lombok is optional, as it’s a convenience library that helps us reduce boilerplate code such as getters, setters, and constructors, just by annotating our entities with Lombok annotations. Similar for Spring DevTools.

Let’s start by defining the User entity that we will be using throughout our implementation:

We are initially using the Lombok annotations to define Getters, Setters, toString() , equalsAndHashCode() methods, and constructors to reduce boilerplate implementations. We have also used @Document to mark it as a MongoDB entity.

Next, we will define our Repository layer using the ReactiveMongoRepository interface.

Now we will define the Service that would make calls to MongoDB using Repository and pass the data on to the web layer:

We have defined service methods to save, update, fetch, search and delete a user. We have primarily used UserRepository to store and retrieve data from MongoDB, but we have also used a ReactiveTemplate and Query to search for a user given by a regex string.

Let’s first look into the annotation-based components. We can simply create a UserController for that and annotate with routes and methods:

This almost looks the same as the controller defined in Spring MVC. But the major difference between Spring MVC and Spring Webflux relies on how the request and response are handled using non-blocking publishers Mono and Flux .

We don’t need to call subscribe methods in the Controller as the internal classes of Spring would call it for us at the right time .

We must make sure that we don’t use any blocking methods throughout the lifecycle of an API. Otherwise, we lose the main advantage of reactive programming!

Initially, the Spring Functional Web Framework was built and designed for Spring Webflux but later it was also introduced in Spring MVC. We use functions for routing and handling requests. This introduces an alternative programming model to the one provided by the Spring annotation-based framework.

First of all, we will define a Handler function that can accept a ServerRequest as an incoming argument and returns a Mono of ServerResponse as the response of that functional method. Let’s name the handler class as UserHandler :

Finally, we will define some properties as part of application.yaml in order to configure our database connection and server config.

This constitutes our basic non-blocking REST API using Spring Webflux. Now this works as a Publisher-Subscriber model that we were talking about initially in this article.

Server-Sent Events (SSE) is an HTTP standard that provides the capability for servers to push streaming data to the web client. The flow is unidirectional from server to client and the client receives updates whenever the server pushes some data. This kind of mechanism is often used for real-time messaging, streaming or notification events. Usually, for multiplexed and bidirectional streaming, we often use Websockets . But SSE are mostly used for the following use-cases:

The biggest limitation of SSE is that it’s unidirectional and hence information can’t be passed to a server from the client. Spring Webflux allows us to define server streaming events which can send events in a given interval. The web client initiates the REST API call and keeps it open until the event stream is closed.

Here, we will stream all the users in our system every 2 seconds. This serves the whole list of updated users from the MongoDB every interval.

Reactor Netty is an asynchronous, event-driven network application framework built out of Netty server which provides non-blocking and backpressure-ready network engines for HTTP, TCP, and UDP clients and servers.

Spring WebFlux automatically configures Reactor Netty as the default server but if we want to override the default configuration, we can simply do that by defining them under server prefix.

We can also define the other properties in the same way that start with the server prefix by overriding the default server configuration.

Spring WebFlux or Reactive non-blocking applications usually do not make the applications run faster. The essential benefit it serves is the ability to scale an application with a small, fixed number of threads and lesser memory requirements while at the same time making the best use of the available processing power. It often makes a service more resilient under load as they can scale predictably.

WebFlux is a good fit for highly concurrent applications. Applications which would be able to process a huge number of requests with as few resources as possible. WebFlux is also relevant for applications that need scalability or to stream request data in real time. While implementing a micro-service in WebFlux we must take into account that the entire flow uses reactive and asynchronous programming and none of the operations are blocking in nature.

If you want to learn about how to build a client to a reactive server, have a look at our WebClient article.

You can refer to all the source code used in the article on Github.