The above is a very simple Spring starter case where Foo is injected into Bar , which happens in context.getBean("foo").

The process is as follows. 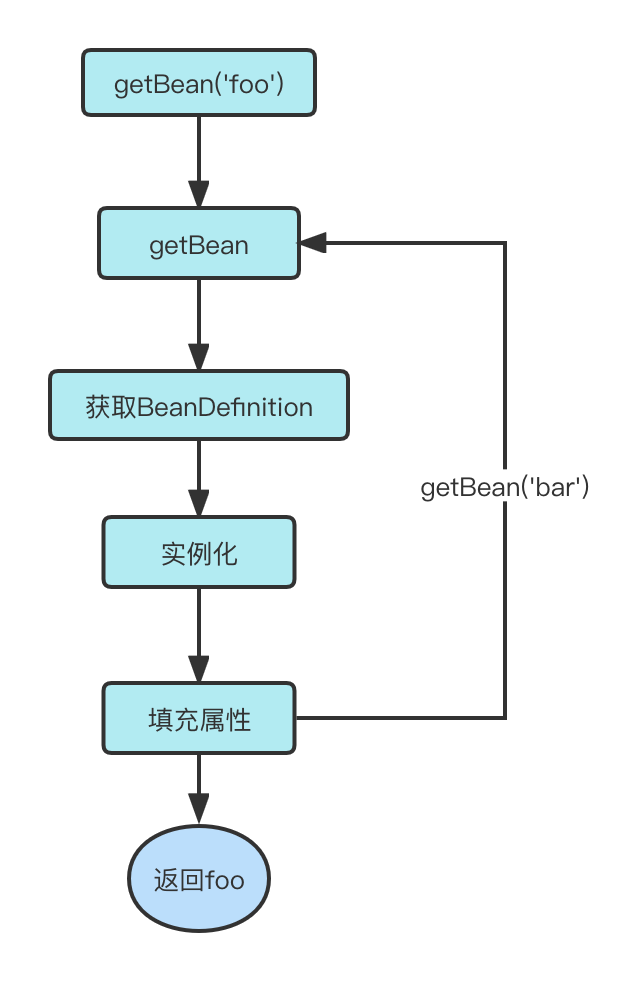 The above is a brief description of the process.

What is a circular dependency

A circular dependency is when A depends on B and B also depends on A, thus forming a loop. 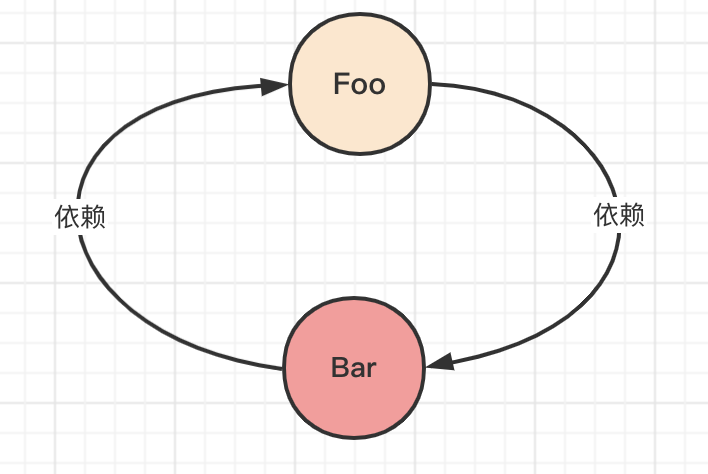 Obviously, recursion becomes a dead loop at this point, how to solve such a problem?

We can add a layer of cache to the process, put the object into the cache after instantiating the foo object, and fetch it from the cache every time we get the bean, and then create the object if we can’t.

The cache is a Map, key is beanName, value is Bean, after adding the cache, the process is as follows. 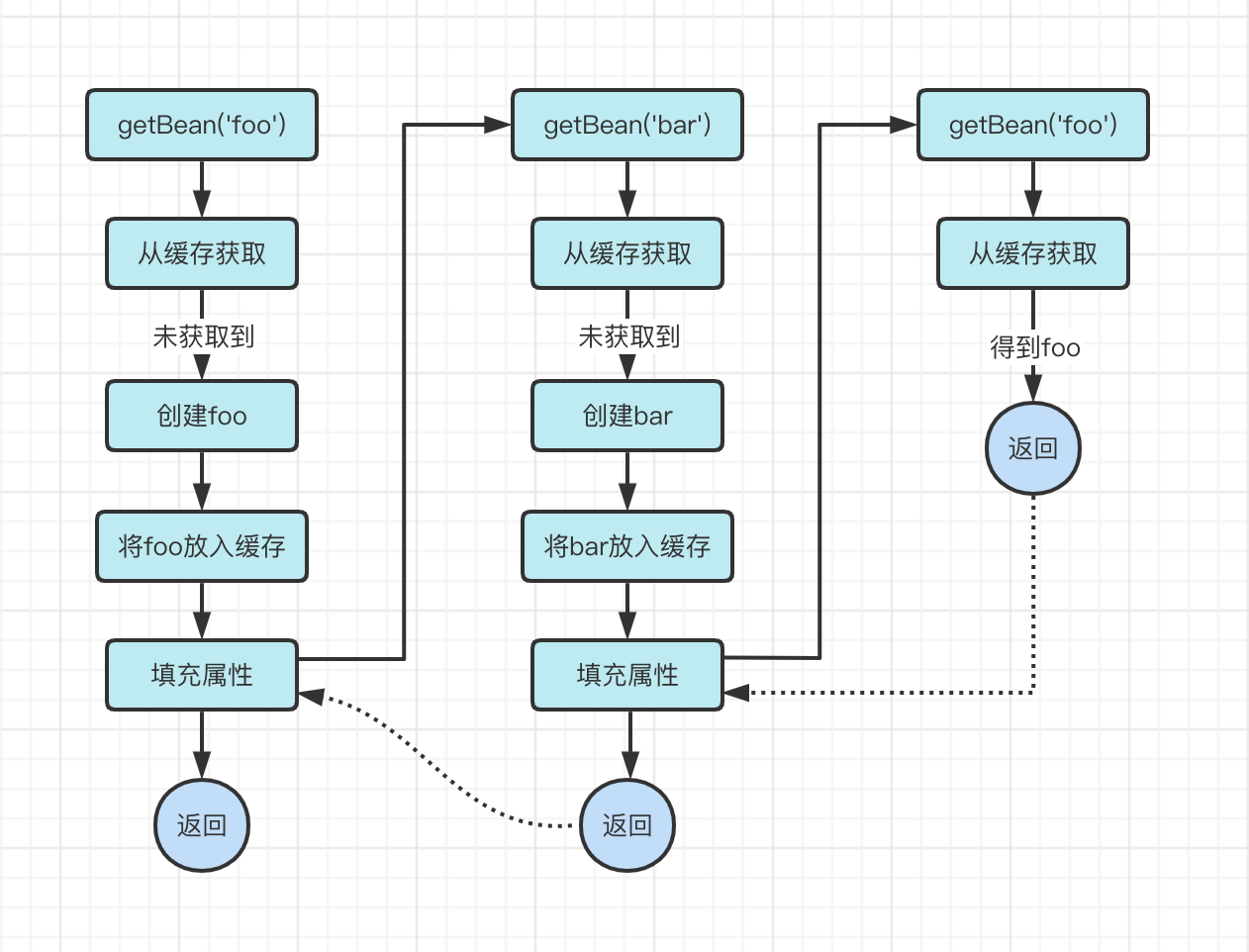 After adding a layer of caching to the above process we found that it does solve the problem of circular dependencies.

As you may have noticed, this design is problematic when there is a multi-threaded situation.

Let’s assume there are two threads that are gettingBean(‘foo’)

At this point, let’s say thread one hangs and thread two is running, then it will perform the logic of getting foo from the cache, at which point you will find that thread two gets foo because thread one just put foo into the cache and at this point foo hasn’t been populated with properties!

If thread two gets the foo object that has not been set to a value (bar) and happens to use the bar property inside the foo object, then it will get a null pointer exception, which is not allowed! 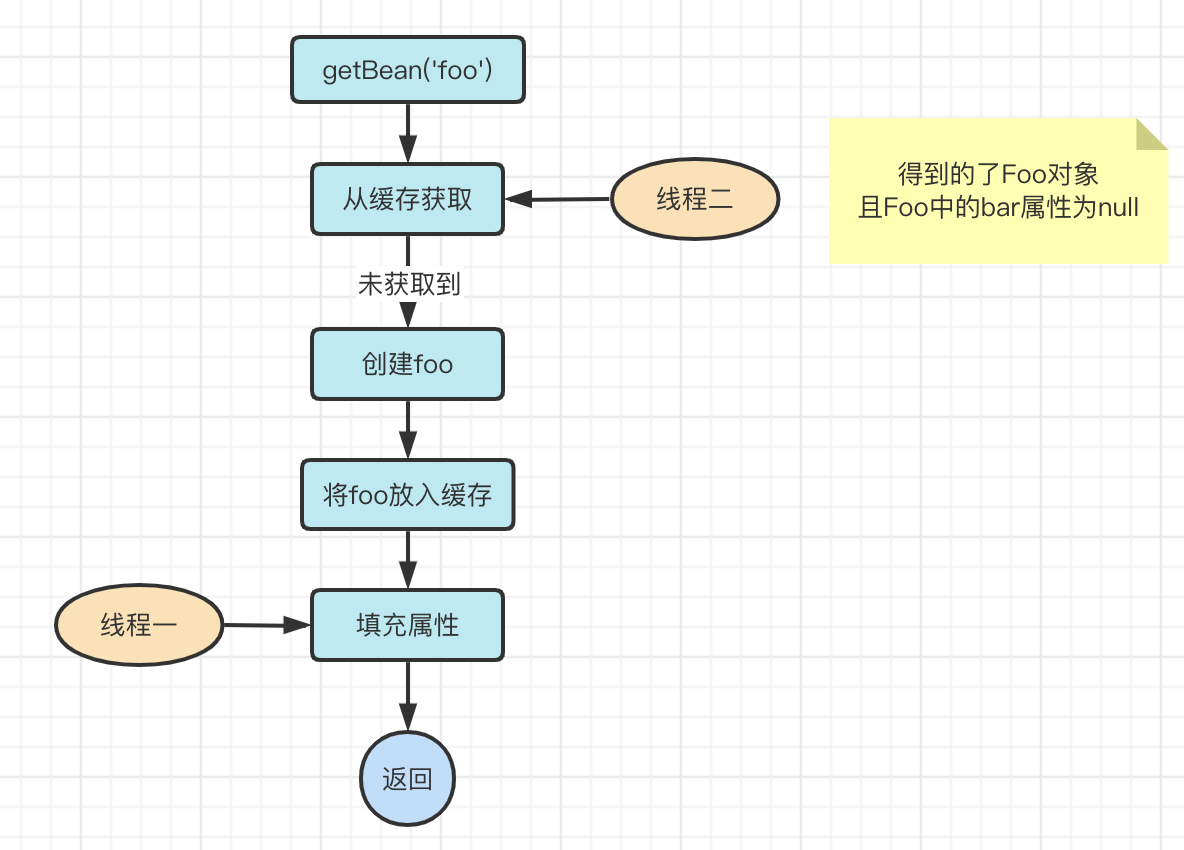 So how do we solve this new problem?

The easiest way to solve the multi-threaded problem is to use locks.

We can lock before [fetching from cache] and unlock after [filling properties].

In this case, thread two must wait for thread one to complete the entire getBean process before fetching the foo object in the cache.

Suppose we have three objects A, B and C

At this point we want to getBean(‘A’), so what should we expect? Do we expect to get the A object directly from the cache and return it? Or should we wait for the lock to be fetched before getting the A object?

Obviously we expect to get the A object back directly, because we know that the A object is complete and we don’t need to get a lock.

But it is also clear that the above design does not meet that requirement.

At this point the flow is as follows.

Based on the existing process, let’s simulate the situation when the cyclic dependency appears. 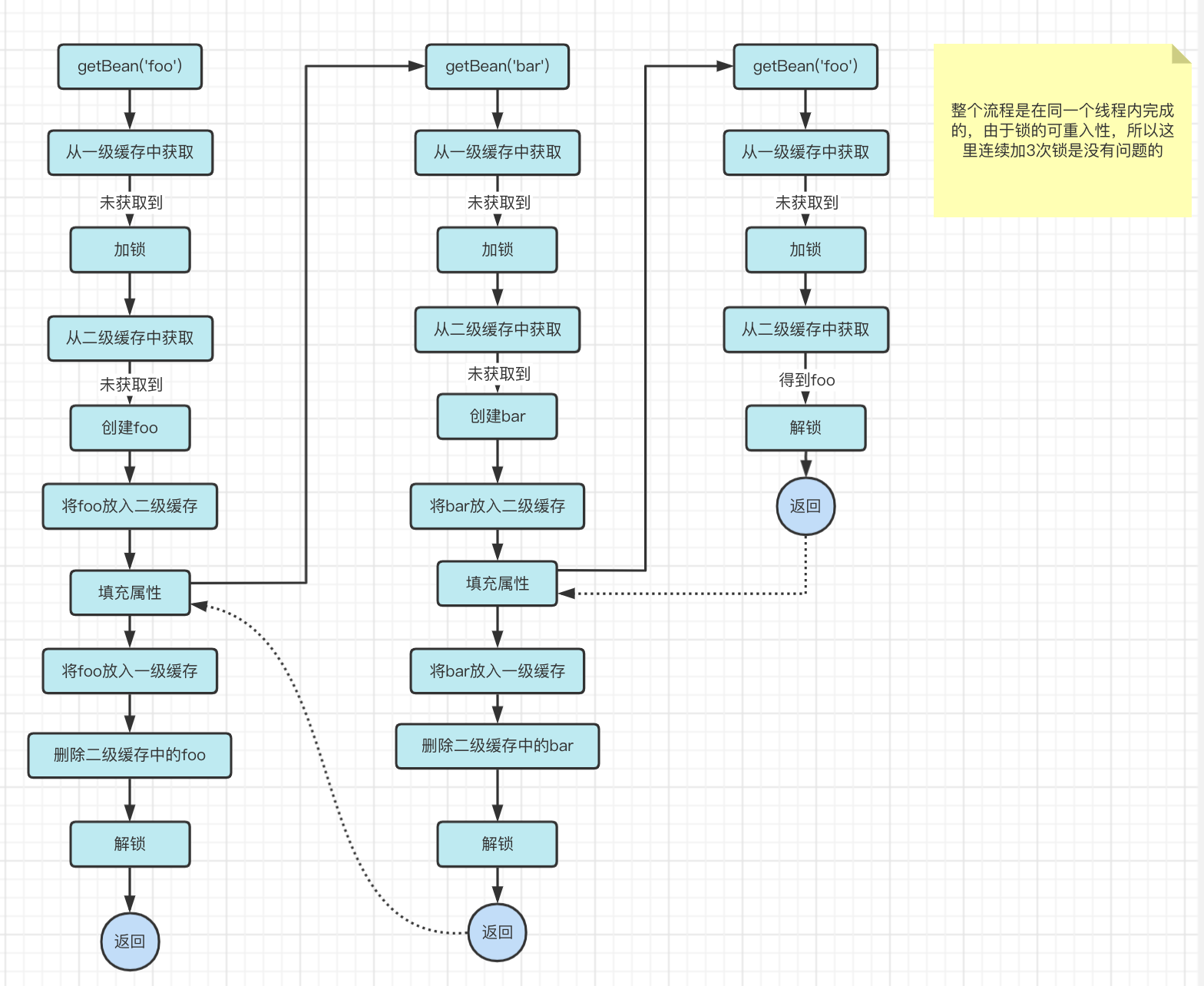 Now, it solves the object completeness problem and meets our performance requirements at the same time. perfect!

Knowing that there are not only normal objects in Java, but also proxy objects, is it possible to meet the requirements when creating proxy objects that have circular dependencies?

Let’s first understand when a proxy object is created.

In Spring, the logic of creating proxy objects is at the last step, which is often called [after initialization].

Now, let’s try to add this part of logic to the previous process. 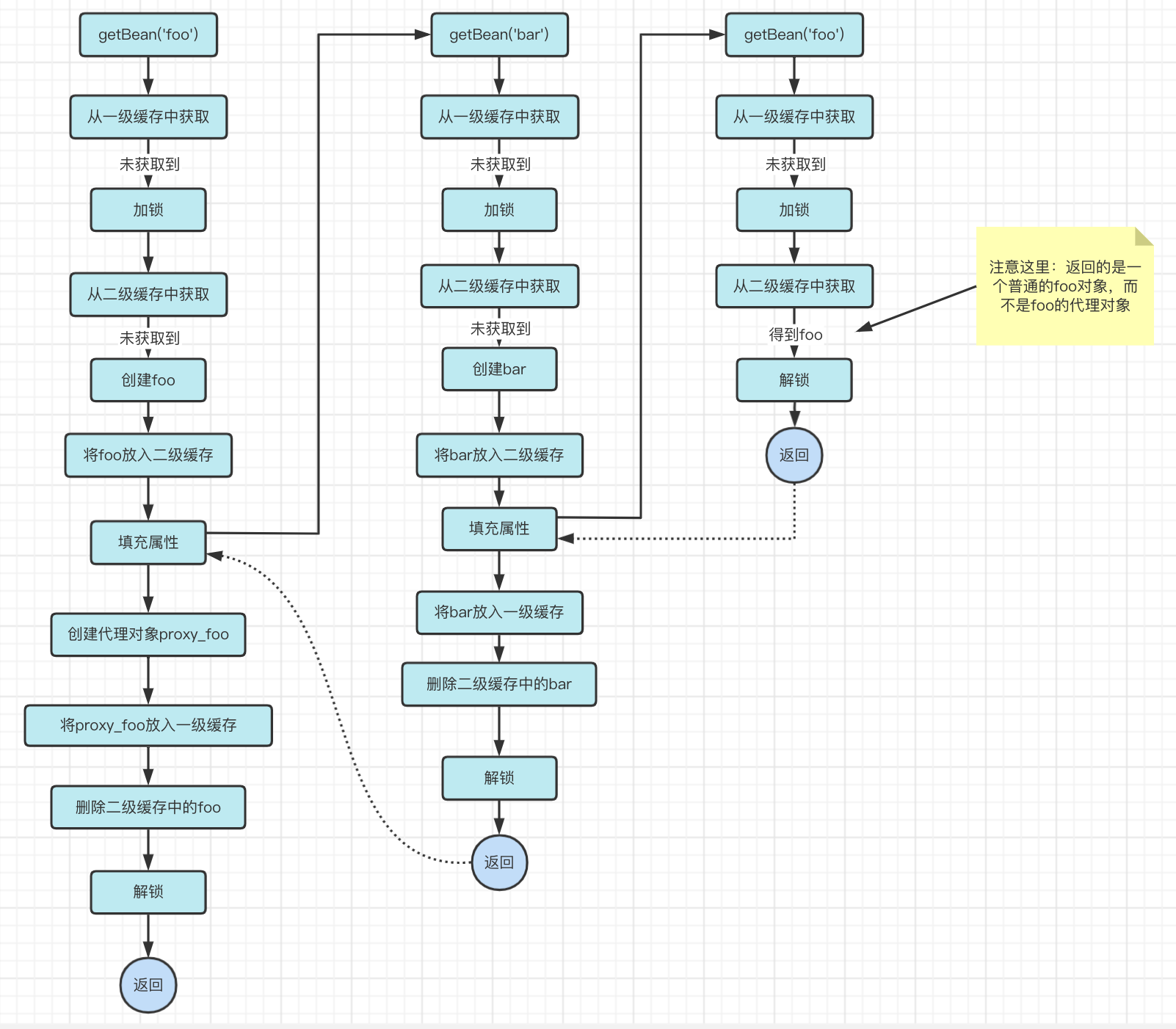 Obviously, the last foo object is actually a proxy object, but the bar dependency is still a normal foo object!

So, when there is a circular dependency on the proxy object, the previous process does not satisfy the requirement!

So how should this problem be solved?

The reason for the problem is that when the bar object goes to get the foo object, the foo object from the secondary cache is a normal object.

So is there any way to add some judgment here, for example, to determine whether the foo object is to be proxied, and if so to create a proxy object for foo, and then return the proxy object proxy_foo.

Let’s assume this solution is feasible and then see if there are any other problems. 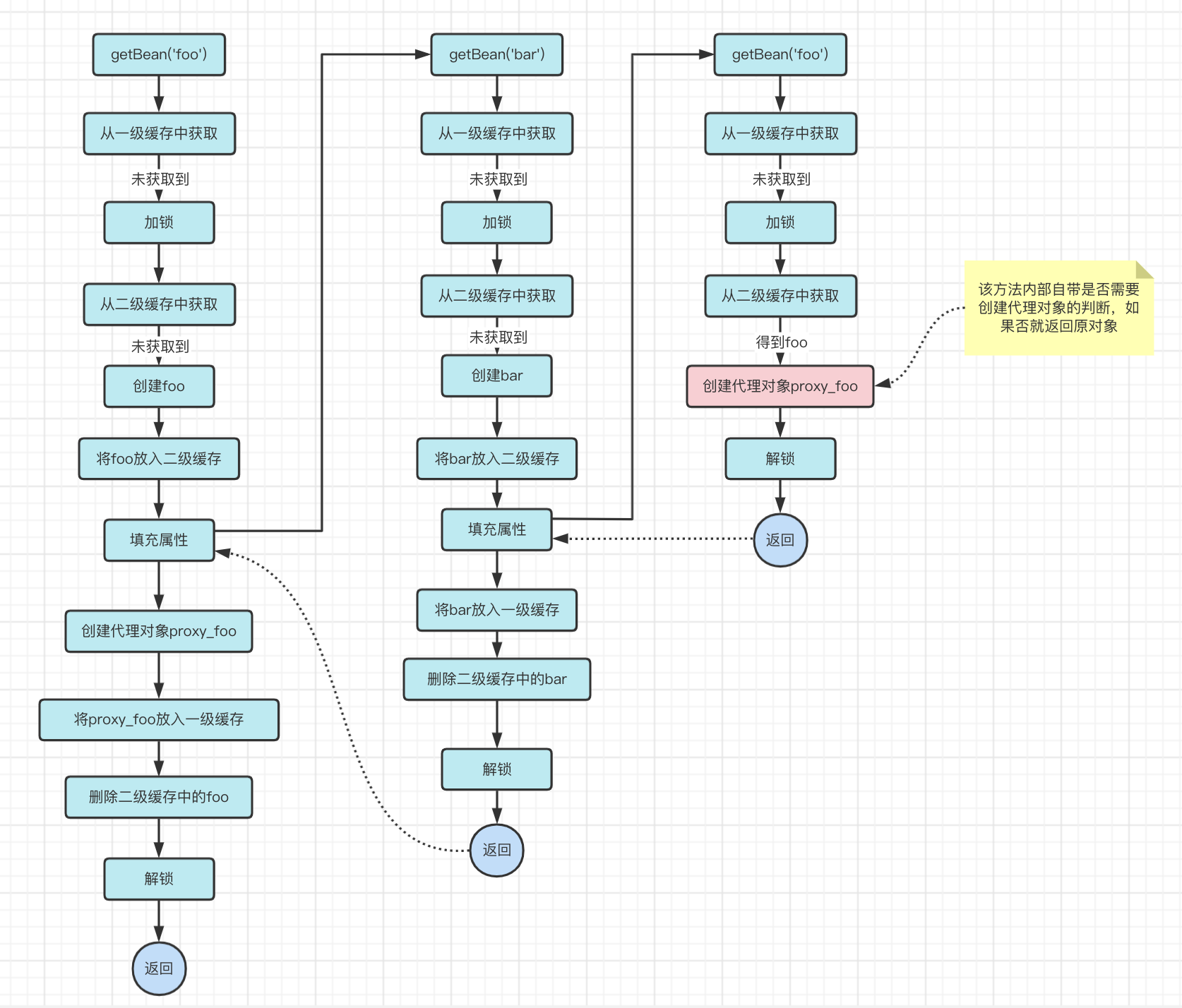 According to the flowchart we can find a problem: the proxy_foo is created twice!

And these two proxy_foo is not the same! Although the foo object referenced in proxy_foo is the same, this is unacceptable.

How to solve this problem?

We know that the proxy_foo created twice is not the same, so how should the program know about it? That is, if we can add a marker to identify that the foo object has already been proxied, so that the program can use this proxy directly and not create another proxy. Wouldn’t that solve the problem?

The flag is not something like flag=ture or false, because even if the program knows that foo has been proxied, the program still has to get the proxy_foo, that is, we still have to find a place to store the proxy_foo.

This time we need to add another level of cache.

The logic is as follows. 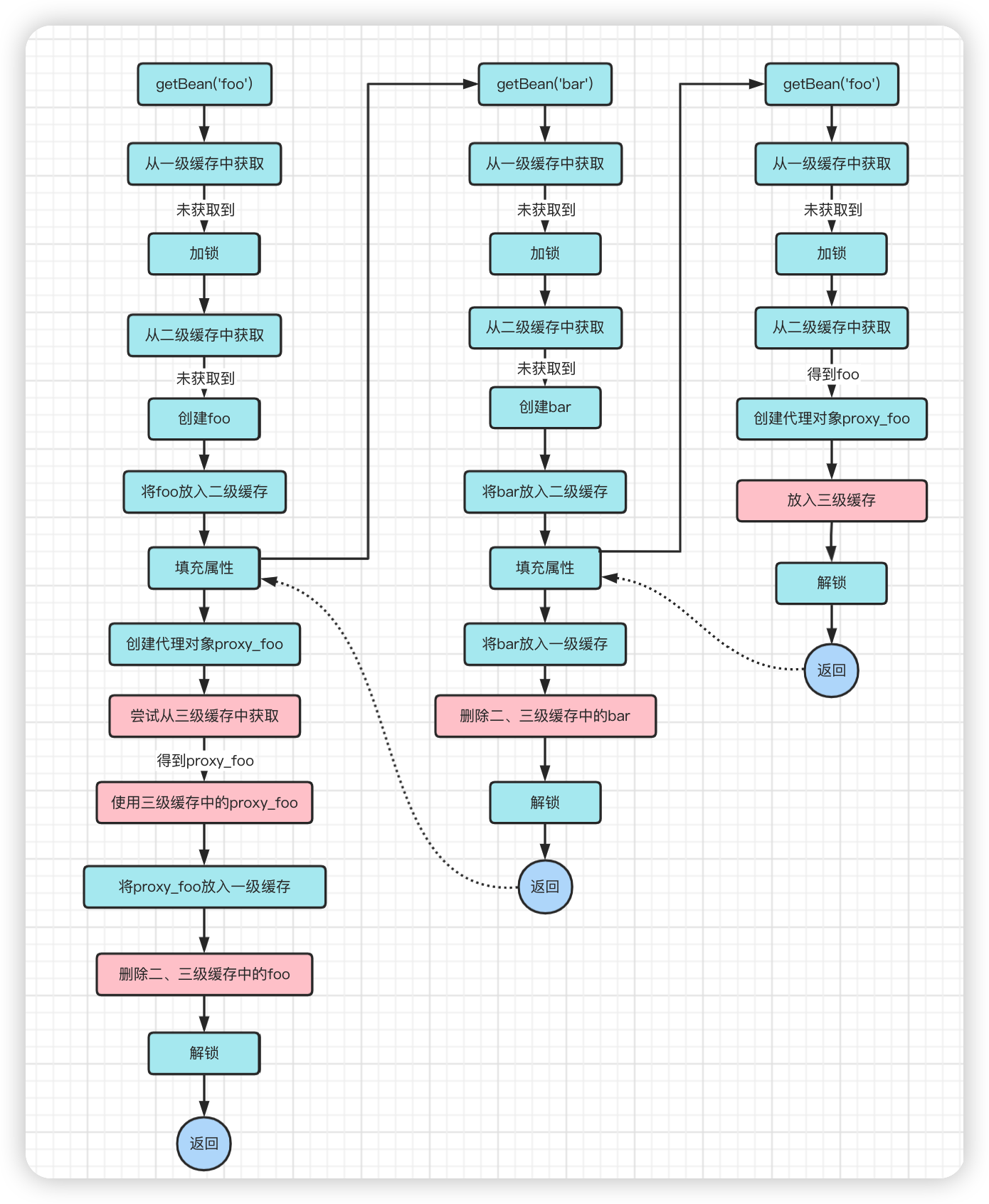 The reason is this, we know that the logic of creating a proxy object is done in a post-processor in the process of Bean [after initialization], and the post-processor can be customized by the user, so the reverse means that Spring has no control over this part of the logic.

We can assume that we have implemented a post-processor ourselves, and instead of creating a proxy object proxy_foo, this processor replaces foo with dog, and if you go with the previous idea (just determine if it is a proxy object) you will find the problem: getBean(‘foo’) returns dog, but the bar object depends on foo.

But if we look at the logic [create proxy object] as just one implementation among many postprocessors.

You will find that, no matter how you toss, getBean(‘foo’) returns the object and the bar object depends on the foo is always the same object. 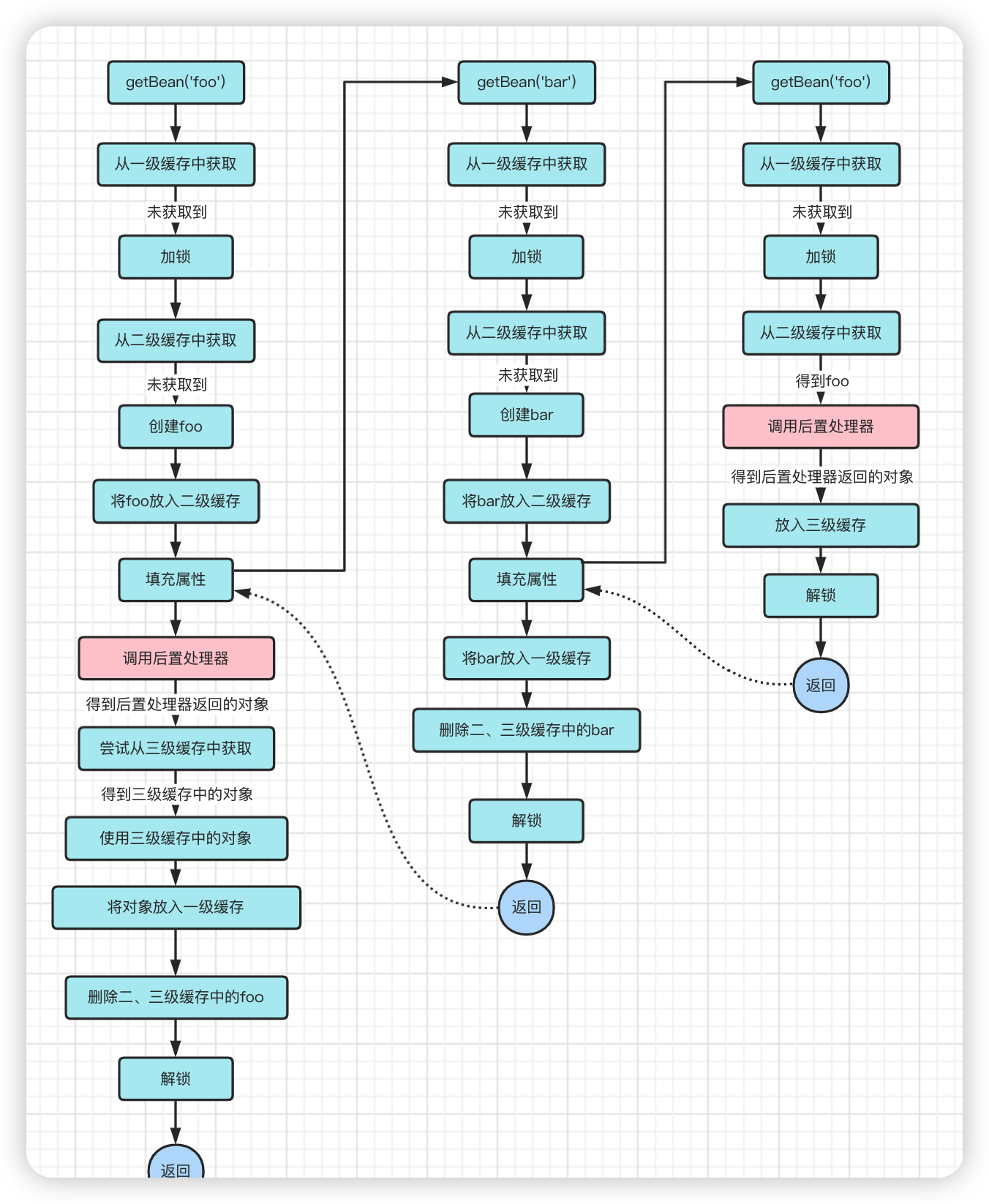 The above is Spring’s solution for cyclic dependencies

My thoughts on this part of Spring’s design

Let’s start with a general review of Spring’s design, which uses a three-level cache

Yes, Spring has made the two steps we are talking about [fetching foo from the second level cache, calling the post processor] directly into an anonymous function

It has the following structure.

The content of the function is to call a series of post-processors.

There has been some controversy about this part of the design: how many levels of caching can be used in Spring to resolve circular dependencies?

This is also a common viewpoint

The perspective of this point of view is that when using the second level cache, the occurrence of cyclic dependency will not be a bug, that is, the ordinary object will not, the proxy object will.

The flow of getBean(‘A’) is as follows. 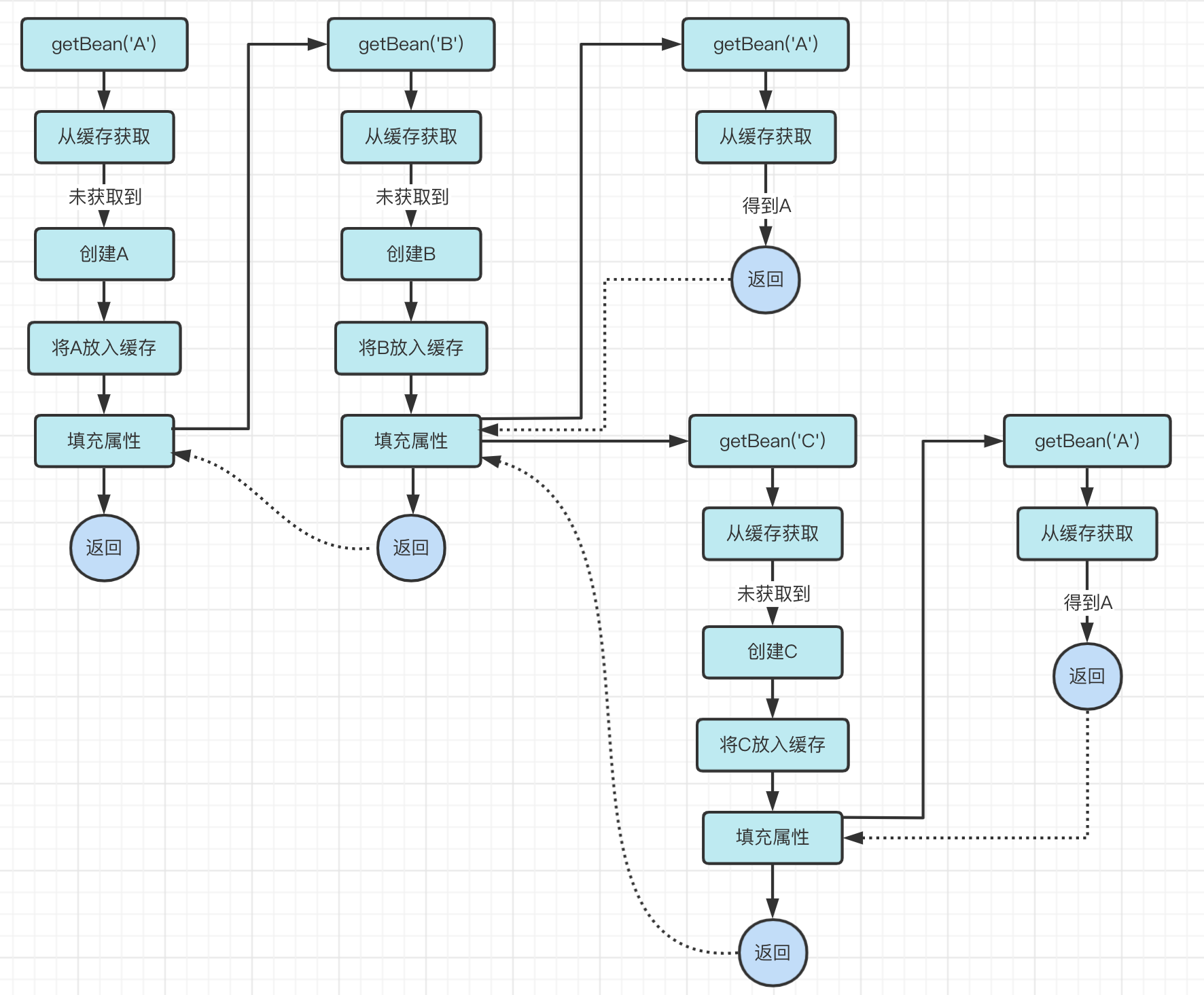 In that process, the A object is fetched from the cache twice.

Now, let’s think about the process in the context of fetching objects from the cache.

Logic when there is only a second-level cache.

Assuming that the original object is returned in the anonymous function, there is no proxy creation logic - there is strictly no post-processor logic here

Then the A object returned each time [the anonymous function in the L2 cache is called to get the object] is the same.

So it follows that ordinary objects have no problem when there is only a second-level cache.

Then the proxy object is created each time [the anonymous function in the second level cache is called to get the object].

So it is concluded that the proxy object will have problems when only the second level cache is available.

So why is the tertiary cache OK?

Logic when the three-level cache.

So the anonymous function will be called to create the proxy object when it is first fetched from the cache, and each subsequent fetch will be taken directly from the third level cache and returned.

In summary, this argument is valid.

This view is also my own: from a design point of view, only a three-level cache can guarantee the scalability and robustness of the framework.

When we review the conclusion of viewpoint one, you will find a very contradictory point: how can Spring know that the objects returned by anonymous functions are consistent?

The logic in anonymous functions is to call a series of postprocessors, which are customizable.

This means that what is returned by the anonymous function is itself outside of Spring’s control.

By design, the three-level cache is designed to include the requirements achieved by the two-level cache.

So we can conclude that a design using a three-level cache will have better scalability and robustness than a design with a two-level cache.

If we use view 1 to design the Spring Framework, we have to add a bunch of logical judgments, if we use view 2, then we only need to add one layer of cache.