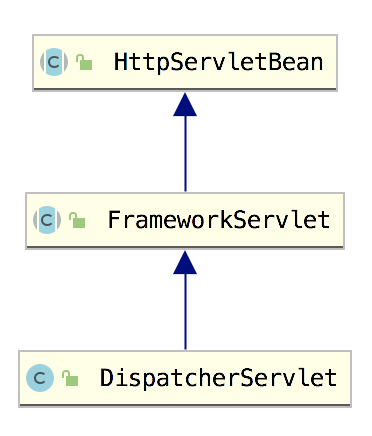 So our analysis starts with the HttpServletBean.

HttpServletBean inherits from HttpServlet, it is responsible for injecting the parameters in init-param into the properties of the current Servlet instance, and also provides the ability to add requiredProperties to the subclasses, it should be noted that HttpServletBean does not depend on the Spring container.

In this method, all the configuration of the Servlet is first obtained and converted to PropertyValues, and then the relevant properties of the target Servlet are modified through the BeanWrapper, a tool provided in Spring that can be used to modify the properties of an object, like the following.

So the bw in front actually represents the current DispatcherServlet object.

When modifying the properties of the target Servlet through BeanWrapper, there is an initBeanWrapper method that is empty. The developer can implement this method in a subclass if needed and perform some initialization operations.

After the properties are configured, the initServletBean method is finally called to initialize the Servlet. However, this method is also an empty method, which is implemented by the subclass.

This is what HttpServletBean does, it is relatively simple, load the Servlet related properties and set them to the current Servlet object, then call the initServletBean method to continue to complete the Servlet initialization operation.

This method is originally quite long, but leaving aside printing logs, exception handling, etc., the remaining core code is actually just two lines.

So the most important thing here is actually initWebApplicationContext method, let’s look at it together.

Let’s take a look at the related methods.

There are two methods involved here.

First get the creation type, and check the creation type, if there is no problem call instantiateClass method to complete the creation work. Then configure various properties for the created wac object. The configLocation is the path to the SpringMVC configuration file we configured in the web.xml file, the default file path is /WEB-INF/[servletName]-servlet.xml.

configureAndRefreshWebApplicationContext method is also mainly to configure & refresh the WebApplicationContext, in this method will call addApplicationListener to add a listener for wac, listening to the ContextRefreshedEvent event, when the event is received, the onApplicationEvent method of the FrameworkServlet will be called, and the onRefresh method will be called in this method to finish refreshing, after refreshing, the refreshEventReceived variable will be marked as After the refresh, the refreshEventReceived variable will be marked as true.

This is the general logic of how the FrameworkServlet#initServletBean method works. The onRefresh method is involved here, but it is an empty method that is implemented in the subclass DispatcherServlet, so let’s look at DispatcherServlet next.

Let’s cut the crap here and go straight to the onRefresh method, as follows.

The viewResolvers variable at the beginning is a collection into which the parsed view resolver objects will be placed.

If the value of detectAllViewResolvers is false, then the Spring container will look for a view resolver named viewResolver, which is a separate view resolver.

In general, we don’t need to configure the value of detectAllViewResolvers in web.xml, we load as many view resolvers as there are.

As a simple example, we might configure a view resolver in the SpringMVC configuration file like this.

By default, the bean’s id is optional. If it does, it can take any value, because ultimately the view resolver will look for it by type, not by id. But if you change detectAllViewResolvers to false in web.xml, then the value of the bean’s id is more important and must be viewResolver.

This code is actually relatively simple, it is to get the default view parser through reflection.

As you can see, there are 8 default key-value pairs defined here, some with one value and some with multiple values. The initStrategies method in the previous section initializes nine components, but only eight are defined here by default, one MultipartResolver is missing.

This is understandable, as not all projects have file uploads. And even if there are file uploads, it is not easy to determine which specific MultipartResolver to use, so it is up to the developer to decide.

defaultStrategies actually loads these 8 key-value pairs, where the view resolver corresponds to org.springframework.web.servlet.view.InternalResourceViewResolver. When no view resolver exists in the Spring container, the default view resolver is this.

This is the workflow of initViewResolvers, the other 8 are similar to it, the only difference is initMultipartResolver, as follows.

As you can see, it only looks up the bean instance based on the bean name, not the default MultipartResolver.

Speaking of which, let’s talk about a small detail in the SpringMVC configuration.

Well, this is the initialization process of SpringMVC, which mainly involves HttpServletBean, FrameworkServlet and DispatcherServlet instances. HttpServletBean is mainly to load the various properties of the Servlet configuration and set to the Servlet. FrameworkServlet is mainly to initialize the WebApplicationContext. DispatcherServlet initializes nine of its own components.