When a user wants to access a resource, the voter votes for or against the resource based on the user’s role, and the voting is based on the results of the voter.

This article focuses on the three voting mechanisms and the default voter.

Let’s look at the voter first.

As you can see, there are several implementations of the voter, and we can choose one or more of them, or we can customize the voter, and the default voter is WebExpressionVoter.

Let’s look at the definition of AccessDecisionVoter.

Let me explain a little.

Let’s look at the implementation of each of the voters.

RoleVoter is mainly used to determine whether the current request has the role required by the interface, let’s look at its vote method.

The logic of this method is very simple. If the current login subject is null, it returns ACCESS_DENIED to deny access; otherwise, it extracts the role information from the authentication of the current login subject and compares it with the attributes, and if it has any of the required roles in the attributes, it returns ACCESS_GRANTED to deny access. If any of the required roles in attributes is present, ACCESS_GRANTED is returned, indicating that access is allowed. For example, if the role in attributes is [a,b,c] and the current user has a, then access is allowed, and it is not necessary to have all three roles.

Another thing to note is the supports method of RoleVoter, let’s take a look.

As you can see, there is a rolePrefix prefix involved here, which is ROLE_. In the supports method, only if the subject role prefix is ROLE_, this supoorts method will return true and this voter will take effect.

RoleHierarchyVoter is a subclass of RoleVoter, which introduces role hierarchy management, or role inheritance, based on RoleVoter role judgment.

After the role hierarchy, you need to get the actual roles available through the getReachableGrantedAuthorities method

This is an expression-based authority control voter, which we won’t go into too much detail here (I’ll explain it in detail when I get a chance). Simply look at its vote method.

If you are skilled in using SpEL, this code should be easy to understand

The three voters described above are the three we use more often in practical development.

Consider this voter when a project introduces RememberMe and wants to distinguish between different authentication methods.

Provides helper methods for writing domain object ACL options that are not bound to any specific ACL system.

Permissions handled using the @PreFilter and @PreAuthorize annotations are authorized through PreInvocationAuthorizationAdvice.

Of course, if these voters do not meet the requirements, they can be customized.

A request doesn’t necessarily have only one voter, there may be multiple voters, so on top of the voters we need voting mechanism. 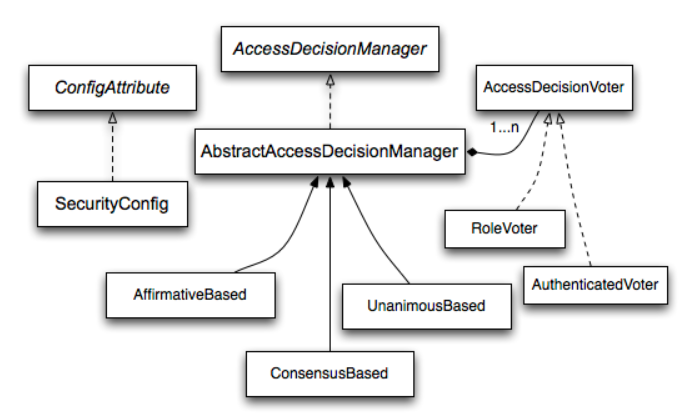 There are three main voting-related classes.

Their inheritance relationship is shown in the figure above.

The differences between the three decision makers are as follows.

The specific logic here is relatively simple, I will not analyze the source code, you can see for yourself if you are interested.

When we use expression-based permission control, like the following.

Then the default voter and decision maker are configured in the AbstractInterceptUrlConfigurer#createDefaultAccessDecisionManager method.

Here you can see the default decision maker and voter, and after the decision maker AffirmativeBased object is created, it also calls the postProcess method to register to the Spring container. If we want to modify the object, it is very easy to do so.