There is a tool class BCryptPasswordEncoder for password encryption in Spring Security, which is very simple and interesting to use. Let’s see how it works.

First create a Spring Boot project and add the Spring Security dependency. Then create a test class with the following code.

In the above code, a BCryptPasswordEncoder class is first instantiated and then the same plaintext string is encrypted and output using the encode method of the class. Run the above code and the output result is as follows.

As you can see from the above output, the same plaintext is encrypted twice, but different results are output. Isn’t it amazing? But there is a problem, if you use BCryptPasswordEncoder to encrypt the login password, can it still be verified? Of course it is possible to verify.

To verify, you use the matches method of BCryptPasswordEncoder, and the code is as follows.

Use the matches method to verify that the plaintext before encryption and the ciphertext after encryption match. The output is as follows.

You can see that the two encrypted strings are different, but both can successfully match the original plaintext password “123456” by matches method. Again, this is amazing, why is this?

How the encode and matches methods work

Let’s take a look at how they work through the source code.

First we download the dependent source code locally, so that we can debug it with IDEA. First set a breakpoint at the encode method to see how encode is implemented, the code is as follows.

Run directly to the return statement and look at the value of salt, which is as follows.

Then proceed to the BCrypt.hashpw method, which has the following code.

The code is very long, but the real key code is in the position of lines 43, 44 and 51 above. Line 43 gets the real salt, line 44 uses base64 for decoding, and line 51 uses the password and salt for processing. The return value is rs, in lines 63 and 64, the salt is base64 encoded and put into rs, then the hashed is base64 encoded and put into rs, and finally returned by rs.toString().

Although the above code is long, in fact, the only key thing is the above sentences I mentioned, don’t need to read the rest. Let’s look at the source code of matches, the code is as follows.

There is only one line of code here, but the code also calls the hashpw method, the parameters passed in are plaintext and hashed, plaintext is our password, i.e. “123456”, hashed is the encrypted password. Here we basically understand. After hashed enters the hashpw function, it takes out the real salt through the code in line 43, and then encrypts it with our password, so that the process is connected.

When I saw that BCryptPasswordEncoder could generate different ciphertexts for the same password and also match them by matches method, I thought it was amazing. After debugging, we found that the ciphertext contains a lot of information, including the salt and hash after encryption with salt, because each time the salt is different, so each time the hash is also different. This way, the same plaintext can generate different ciphertexts, and the ciphertext contains both salt and hash, so the verification process and generation process are the same.

A rough flowchart of the call relationship is attached for your reference. 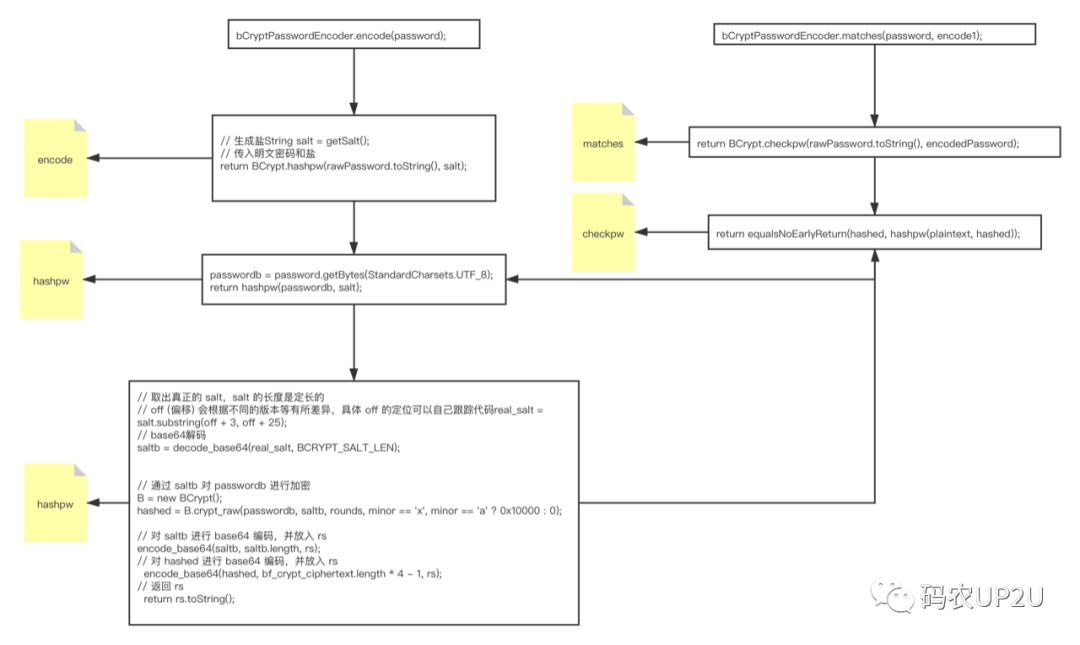